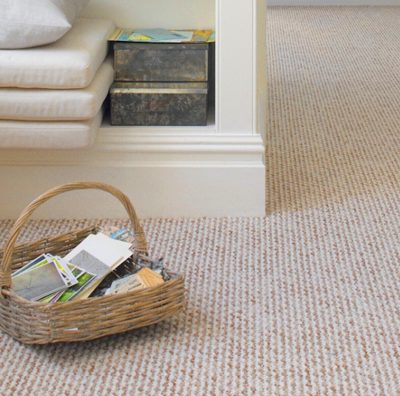 While still produced, the Berber carpet that was such a hot item in the 1990s is indeed outdated. Berber has, instead, become a synonym for any looped-weave carpet. And the new Berber styles are anything but behind the times.

“Berber carpet originally came from North Africa,” said Kevin Miller, a member of the sales staff at City Tile in Murfreesboro. “It was made from wool and was known to have little flecks in it that were actually dirt. When manufacturers started to recreate the weave, they included the flecks, but made them an assortment of colors.”

“The first machine woven Berber carpet was made from olefin,” said City Tile designer Robyn Faulk. “Olefin is a petroleum by-product, and the original carpets were hard to keep clean because the oil actually leeched out of the fiber and trapped dirt in the rug.”

Manufactured Berber
Manufactured Berber began as a copy of the plain, un-dyed style of carpet made in North Africa. The only choice of colors were varying shades of cream and light brown, like the shades of raw wool. The most durable Berber carpet made today with the original styling are made of nylon. The nylon version is much easier to clean and stands up to time and traffic. But now there is no need to stick with the creamy looped carpet with the flecks of color. Berber carpet today is all about design.

Mohawk, through May 30 of 2017, is offering a sale on looped and other styles of carpeting. This is the perfect time to come in and look at all of the new versions of Berber carpeting.

Berber or looped-weave carpets are highly durable. They can be used in high-traffic areas in the home, as well as for commercial applications. They are perfect for transitional and modern styled homes. However, they do take a bit more effort to clean. Over-wetting can create stains and harsh chemicals can burn the fibers. The best way to care for your Berber is to have it professionally cleaned every six to 12 months and to vacuum it frequently.

Or you can fly to North Africa where the original Berber carpets are still available. They are made only of wool and to very specific rules dictated by the Tunisian Handcrafts Authority, which certifies them with a red wax seal. Then you have to make special arrangements to get them home.

We will deliver and lay your new Berber carpet for you…

Yep, we thought so. See you soon in the showroom!

If you have any questions about Berber carpet, don’t forget to let us know!