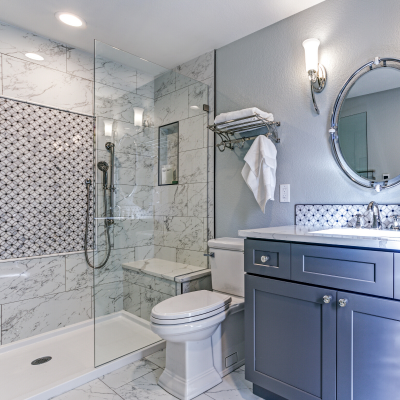 Mosaic tiles have long been used in bathrooms as accent pieces, run around tubs or put in shower niches, but an up and coming trend is to be more creative with the use of mosaic as a design feature. Just as Spanish and Middle Eastern painted tiles are becoming more popular, so is the use of more intricate mosaic designs.

A mosaic is made of small, flat, and mostly square (but sometimes triangular) pieces of stone, glass, tile, or metal. These pieces are known are tesserae. Round pieces go by the name of “pebble mosaics”. Traditional hand-cut mosaic pieces made in the old way are called Smalti. Samlti has a different look and feel from most mosaic tiles made from ceramic tiles, because it is fashioned from the glass used for reproducing religious icons. These small pieces are carefully arranged into a picture, a pattern like wallpaper, or geometric designs. Each small piece is placed with precision, be the design simple or ornate.

Used as far back as 4,000 years by the Mesopotamians when building some of the first cities, the most famous samples of ancient mosaic work can be found preserved in the ruins of Pompeii in Italy. Although the oldest glazed tile was found in what is now modern-day Iran in 1500 BC, the flexibility in creating beautiful and intricate works of art caused the process to spread quickly into Macedonia, Carthage, and then on to Rome.

City Tile in Murfreesboro, Tennessee has many different square mosaic tile options available from most of their tile vendors, as well as a vast selection of designer pre-cut patterns in glass, natural stone, and marble. Some of their choices also have touches of metal. And the hottest new trend is to mix matte and gloss finishes, especially in black tiles.

While most construction employs the use of pre-created mosaic designs that come connected on a mesh screen, and are laid much like any other tile, true mosaic work is laid stone by stone. Designers are even blending small mosaic pieces with larger tiles that have been cut into various geometric shapes to create a one-of-a kind pattern over an entire wall behind a stand-alone tub or as the feature wall of a large walk-in shower.

Mosaic is a great way to add a little touch of glitz to a bathroom by bringing in bits of metal or metallic finish on tile or for an opalescent look on glass. There are pre-made designs that intersperse bits of metal, opalescent glass, and natural stone that give any bathroom Hollywood sparkle.