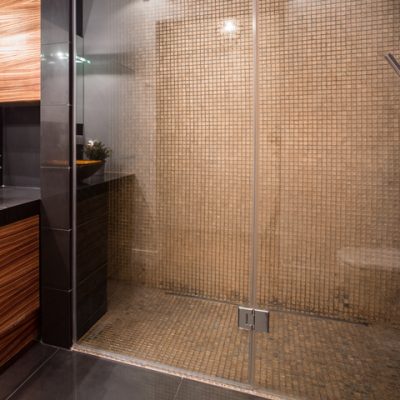 Dear Doug, what’s up with linear drains? What are the pros and cons?

Linear drains have been around for a long time, they have just been given a much more stylish name. Once upon a time they were called trench drains.

They are a specific type of floor drain that was originally designed for durability in high traffic areas in airports, rapid evacuation of surface water, containment of chemical spills, and the constraint of utility lines. Because of their character and design, they have become an architectural feature in high concept walk-in showers.

The drain is a long and narrow rectangle and it sits flush, allowing for the use of large format tiles in shower floors. Instead of in the middle of the shower, the drain is installed at one end or at the door.

High-end styles are usually made of stainless steel with sleek contemporary esthetics. They can be made to complement the décor of any bathroom – from classical to more modern fair.

While linear drains can be found in more and more homes, most are employed in the hospitality and healthcare industries. Residential architects and interior designers can find custom and architectural grates through a number of companies. City Tile can special order a linear drain for your project through Schluter Systems.

Schluter Systems not only contain the drain cover, but the entire underlying assembly needed to make a drain work properly. They also provide a waterproof vapor barrier protecting against leaks and mold. Schluter System’s KERDI-LINE carries a number of linear drain system options.

As to pros and cons, let me be honest, they are expensive. And if you have to move the current drainage lines to make them work, that will make them even more expensive. A basic linear drain runs between $200 and $400 plus installation. Another con is that the bathroom floor will have a noticeable slope toward the drain; instead of the standard all around slope toward the middle of the shower.

Pros include the ability to use large format tiles on the floor of your shower, a smooth surface in the shower for those of us who might not be as young as they used to be and might trip on a central drain, and Schluter System products have an easy-lift cover that allows one to remove a build-up of hair with the greatest of ease. They are also extremely well-made and less likely to leak.